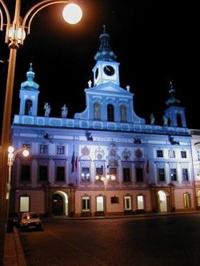 Bohemian King Přemysl Otakar II chose the confluence of the large South Bohemian Rivers Vltava and Malše in 1265 to found the city of České Budějovice to strengthen his position of power in South Bohemia. The regular ground plan of the newly established royal city, the centre of which consists of an extensive square, is an example of the peak of medieval urbanism in the Czech Lands.

Thanks to the king’s favour and good position for long-distance trading routes, České Budějovice soon came to flourish economically so that two beautiful churches were completed and solid fortified walls erected around the city by the turn of the 14th century. At first mostly humble wooden houses were built to serve as dwellings for the residents, however stone buildings soon replaced these.

The Bohemian kings richly rewarded the people of České Budějovice for their loyalty to the royal crown with numerous privileges guaranteeing economic prosperity and busy commercial traffic. One of the most important was the privilege of Charles IV of 1351, which decreed that merchants should travel through České Budějovice and offer their goods here, but it also banned certain types of crafts to within one mile of the city.

During the turbulent times of the 15th century, the Catholic city of České Budějovice became a strong place of support against the Hussite movement. Commander Jan Žižka recognised only too well just had strong the city’s fortifications were and did not even attempt to invade it. On the other hand, the trade war with the powerful noble family of Rožmberk, which often developed into armed skirmishes, almost became a tradition. 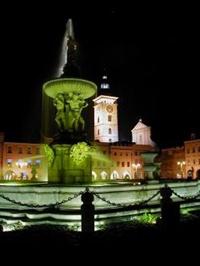 Medieval České Budějovice remained a city with a closed ring of fortified walls and there were only several courts and gardens scattered across its outskirts. However with its population of almost 4,000 it became one of the biggest and most important cities in the Kingdom of Bohemia. About two-thirds of the population were German-speaking residents, a third were Czechs and several Jewish families also settled here as of the mid 14th century. However in 1506 the Jews were driven out of the city and had their property confiscated.

The sixteenth century brought extraordinary prosperity to České Budějovice. Considerable profits flowed into the city coffers particularly from silver mining from the surrounding mines as well as beer brewing, fish farming and the salt trade. The city community used the accumulated money to provide the city with an imposing look: a new city hall building appeared, the city walls were rebuild and the city council decided to construct a high tower, which is called “Black” to this day. In view of the fact that the burghers decorated their houses, České Budějovice acquired a charming Renaissance appearance. In 1569 a mint was established here, which minted coins from silver extracted in the mining districts around today’s Rudolfov. However the mining town of Rudolfov became a thorn in the eye of the České Budějovice Catholic burghers when it became a place of refuge for followers of the Lutheran faith. 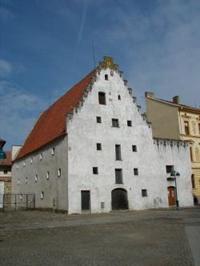 During the estates uprising and the subsequent Thirty Years’ War České Budějovice again remained loyal to the emperor and resisted the attacks of the estates army. Modern fortifications made the city an important strategic fortress to which the highest provincial officials moved several times and the local church served to hide the Bohemian crown jewels during the Thirty Years’ war in the 17th century. While the actual events of the war did not cause much damage, a fire in July 1641 destroyed more than half the houses. The restoration of the city took several decades. The Baroque age again substantially transformed the appearance of the public buildings and private houses in the city, enriched České Budějovice by a number of church monuments and also by one the symbols of the city - Samson’s Fountain. A pilgrimage to the nearby curative spring in Dobrá Voda, where a beautiful Baroque church was built at this time, became popular with the people of České Budějovice.

The Order of the Piarists became of cultural importance to the city when it settled here in 1762 and established a Latin gymnasium (grammar school). The city theatre was also founded at this time. The České Budějovice archbishopric was founded in 1785 during the reign of Joseph II and almost two decades later the local seminary and philosophical institute were established here. 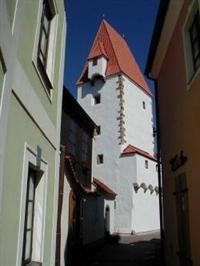 The nineteenth century marked city life as a period of revolutionary technical progress and the development of a modern civic society. The horse-drawn tramway, built between 1825 and 1832 as the first on the European Continent, established a link between České Budějovice and the upper Austrian city of Linz, and together with the Vltava waterway operated by Vojtěch Lanna, it speeded up the transportation of goods both northwards and southwards. This fact obviously prompted the development of trade and industry. Several large industrial enterprises began to operate in the city and attract a large labour force from outside and the increase in the population could not be stopped. Residential dwellings grew up in proportion to the rise in the population. 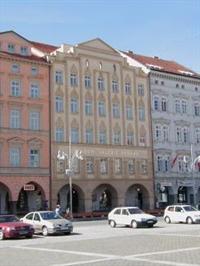 The horse-drawn tramway finally became obsolete at the beginning of the 1870s being replaced by the construction of the steam railway to Pilsen, Prague and Vienna between 1868 and 1874. The city became an important railway junction and the centre of trade between the Austrian and Czech Lands.  At this time České Budějovice society became more distinctly divided between the Czech and German population, different national clubs, schools and last but not least industrial enterprises, began to appear. Many artistic personalities of Czech, German as well as Jewish nationality were active in the city. 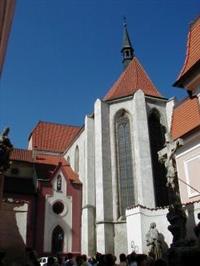 The first decades of the twentieth century brought far-reaching changes in all spheres of city life. For example, at the time when the work of aviation pioneers was causing a sensation, so many České Budějovice residents were already devoting themselves to physical education activities that the Sokol (Falcon) physical education organisation adapted an entire island between two bends of the Vltava into a big sports ground. The city grew and thanks to this today it contains many examples of modern 1920S and 1930s architecture; some of these buildings were the work of leading Czech architectures.

České Budějovice grew into a true economic and cultural capital of South Bohemia and in 1949 it became the seat of the newly created České Budějovice region. In 1948 the Pedagogical Institute was established, today it is the Pedagogical Faculty of the South Bohemian University. Since the 1950s the city has been marked by considerable territorial and population growth, the population has doubled and currently just under one hundred thousand. The South Bohemian University with its several faculties was established in 1991 under the co-participation of the institutes of the Academy of Sciences of the Czech Republic. České Budějovice was declared a statutory city headed by a city mayor and became the seat of the newly constituted South Bohemian Region.